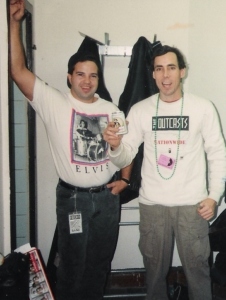 How many times in the course of our lives do we encounter folks who become pivotal to us, influencing our thinking, actions, and (ultimately) our outcomes? Not in the way a spouse or close friend would, but those who by the nature of living an idea/pointing in a direction in a particular moment create a personalized masterpiece of influence on our beings with one or two simple brush strokes.

In my own questionably humble case, there was the high school english teacher who first encouraged me to write, and the fellows who urged me to bring a bass guitar I’d bought to actually come over and play with them (we were all novices, playing three hour versions of “down by the river”). There’s the gal who shared her plan to give up her enviable circumstances in the midwest to take the chance at doing something great on the west coast; her notion motivated me to shift gears and come to northeast Ohio to finish school and play music, not necessarily in that order.

Another such person for myself and many in the music/creative scene here was Jim Clevo.

For the uninitiated the words tireless enthusiast and staunch advocate could begin to describe Jim. Many who knew him considered him to be somewhat eccentric (a good fit around here), if only for his sheer, intense dedication and single-mindedness toward what he saw as his gospel, that to bring the music scene (and its inhabitants) in northeast Ohio to the attention of the greater music world.

Many here who mourned his recent passing also spoke of the difficulty he had in managing relationships with those who reasonably sought to help or emulate him (intense and single-minded may also apply here). Fairness considered, the vast majority of people who sought him out did so mainly to improve their own circumstances by taking advantage of what he willingly offered. It wasn’t a recipe for building trust and true friendship, even when genuine gratitude was forefront in the mix.

Jim could be very funny in a pointed and acerbic sort of way; perhaps most folks never saw that particularly because he was generally always “on”. Music was always the greatest common interest thus the overriding topic of conversation amongst us all.

Perhaps what made Jim’s presence most compelling was simply that he opened up a world of possibilities for many of us. His idea to present and promote Cleveland music at many of the music conventions that were just beginning to emerge did just that. When Jim first went to South by Southwest in 1989, it had only recently been established by a small group of Austin music professionals to bring worldwide attention to the burgeoning Austin music scene. My group at the time had seen its best opportunities come and go, but when he took his first Cleveland compilation cassette to South by Southwest that spring, the phone began to ring with interest again.

The best tribute I could ever pay to Jim would be to simply share some of the things that effectively resulted from his efforts. I think he’d like that.

In no particular order:

1) Hooked us up with a record label

Jim came back from the CMJ Seminar in New York in autumn 1988 with news that he had met a Boston-area college dj who was familiar with and very fond of my group from a recording we’d done a few years before. Furthermore, this fellow (a righteous gent named Chris Porter) was starting a label and was interested in hearing more from us. In the following three years, his label Presto! released an LP/CD and a 7″ for us, each receiving high-profile critical favor (Melody Maker and Billboard, respectively). In addition, Chris has provided many outstanding opportunities for subsequent musical endeavors of mine/ours, and he remains a trusted friend and ally to this day.

If Jim had only ever done this for me, he’d still be in my hall of fame, first vote.

2) Set the template for musicians working together cooperatively

In 1988 when Ohio raised its legal drinking age across the board to 21, the music scene took a serious hit as a significant percentage of its patrons were no longer allowed to frequent the clubs legally. Shortly after, Jim began to produce compilations of original music from northeast Ohio to promote at the various conventions he was attending. In order to promote these efforts locally, he began to stage compilation showcases at local clubs; the response was eye-opening, as he showed that through cooperation it was no longer necessary for one band or artist to have to carry a night as the main draw. Moreover, it was not necessary to produce an entire release in order to receive press or radio airplay. The story goes that one group, Bluto’s Revenge, began with the purpose of putting a song on one of Jim’s cd compilations; the band (who are still performing) stayed around long enough to open for Spinal Tap at Nautica Stage and get featured on a mid-90s WMMS cd compilation (covering “sometimes I’d rather be alone”).

In 1991 when I was thinking of starting a record label, I co-opted Jim’s compilation/ showcase model and applied it to the folk/rock/nightmusic scene here to produce the label’s flagship release “They Showered Us With Beads and Flowers”. By then Jim had begun to consult/broker cd production and manufacturing for many of the artists in the area; he stewarded a number of our label releases over the following years and in late 1996 he staged a release show for my cd “acrowno’stars”.

3) Introduced me to South by Southwest(!)

Music trade conventions such as New Music Seminar, Berlin Independence Days, CMJ and South by Southwest (SXSW) were established to provide promotional and networking opportunities for those plugging their talents, wares and services in the art and artifice of making music. It gave those of us who aspired to improve our lot the forum to make direct contact with those who could facilitate opportunity. Scoring an artist showcase at one of these events could serve the purpose of raising one’s profile nationally and internationally as well as at home. In a more immediate sense a convention showcase provided a fundamental cornerstone on which to base booking and promoting accompanying tours. Perhaps, most importantly, conventions were opportunities to hang out with others who felt as passionately about music as we did, a much-needed booster shot.

When Jim first explored SXSW, it was only about music – no multimedia, no Bieber or Miley, and maybe one or two non-SXSW showcases populated by Austin bands who hadn’t been selected for official showcases. As conventions in NYC (like CMJ) were characterized by industry people being “at work”, SXSW was completely “at play” – it was mid-March, the weather was sunny and 75 (small wonder so many Clevelanders got on board), and everybody relaxed and had fun. It was still a manageable size, unlike the overripe SXSW of today; you could get a table at a restaurant (largely outdoors, and the food and drink were outstanding), and you could see 98% of the artist showcases that you wanted to. The fact that Jim knew and worked with the folks who had created it also greased the skids somewhat for us to land showcases as we dropped new recordings. Last but far from least, we always came home with a renewed vigor that carried us through the following months.

When you say “South by Southwest” to many of the musicians and music people who attended at the time you’ll get a immediate smile and an agreeing nod. The handful of years we went there leap to my mind as the most pure fun I’ve experienced in the time I’ve done music, the epitome of a working music vacation (including tours we played around the convention). We were always so excited to go that the preparation involved never felt like “work”.

In his way, and especially when it came to South by Southwest, Jim was pied piper, carnival barker, and ringmaster; he was at his best.

The last time I spoke with Jim (this past spring), he described the physical and medical gauntlet he had been through; he laughed when I told him that he was “the cat with nine lives” (not an exaggeration).

He also talked about his experiences as an advocate for open adoption records legislation (he had been adopted, and the lack of medical history from his natural parents had left him unprepared for significant health issues he had experienced).

In the last part of our conversation, he described the transcendent feeling he’d experienced on returning to the orphanage where he’d spent his early youth. It seemed by his description that he had found some peace as well as a piece of himself in an extraordinary place and experience. 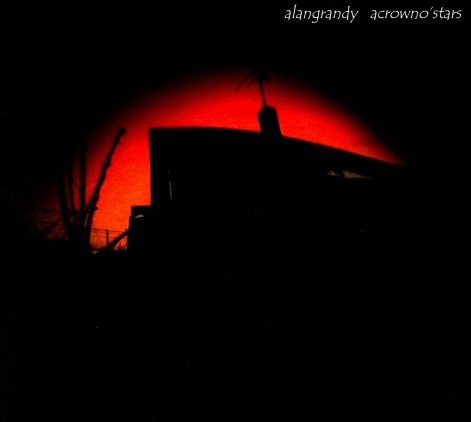 Hi friends and casual viewers, welcome to the new site for soundofthesea.org!

Our site here features three main threads worth checking out: “on my block” highlights folks and activities of interest in our greater sphere, while “underradar” (from the Sputnik song, “last man on earth”) attends to the comings and goings here at Sound of the Sea proper. We also have a “song spotlight”, which features songs both past and present (including alternate and unreleased tracks) along with stories behind and around them – the songs are often free downloads, so all good there. There may be some overlap overall, but it won’t be too messy, we’ll figure that out as we go, much like life.

Please feel free to visit our music page (link below) to see and hear what we’ve been up to over the last handful of years as well. As with Motel 6, the light will (hopefully) always be on here if you choose to stop by.

p.s. the image at the tip-top of the page is of our great lake Erie, no, not its original color, but we’re optimists here, hence the rose-colored perspective, so there ya go…thanks for checking us out!